St Gabriel’s CofE Academy is part of the Houlton CofE MAT; a charitable company founded to provide high-quality education for its communities. The Trust Board, in collaboration with the leadership team, plays a key role in setting and championing the trust’s vision and strategic priorities for the future. The Board also has responsibility for setting and modelling its culture, value and ethos in conjunction with the local diocese and school leaders.

Coventry Diocese and its Board of Education (DBE), created an academy Trust with the developers of Houlton, Urban & Civic. As members they have appointed Trustees to form the Trust Board. To assist with effective governance of the Trust, there are also three Committees which have been set up to oversee key areas of operation. These Committees are the Finance & Resources Committee, Performance & Standards Committee and the HR, Pay and Remuneration Committee. 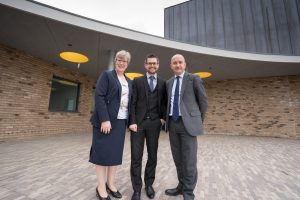 Our Members play a valuable role in safeguarding and overseeing Academy Trust governance and in working to further the Academy Trust’s charitable objectives. Houlton CofE Multi Academy Trust has five members who all offer a range of perspectives and experience. To ensure independence from the Trust Governing Board, the majority of Members do not sit on the Governing Board. You can view our profiles below to find out more about our Members:

Governor attendance is recorded at all meetings and published below. Governors are asked to declare any other interests at the start of the academic year, and make the Academy aware of any changes as the year progresses – a summary of Governor Declaration of Interests can be found below: